Claire Van Zant, Humanities teacher in Rochester, Minnesota sat down with a student reporter in 1981 and spoke for the first time of her service with the RAF during World War II. She worked as a codebreaker and an intelligence officer.

There is some uncertainty regarding her reference to Bletchley Park. The research department of Bletchley pointed out that decrypting the operational instructions for raids was not work done at BP. In addition, he added that there is no part of the site that was underground.

Therefore, either Van Zant was mistaken about an association with Bletchley or, since her work and status changed after the war, she could have received training from Bletchley later.

SPRING, 2022 | The video on this page was taken from a 1982 Spartan Scene feature that included Claire's description of daily duties during her time with the RAF. I found them so compelling I couldn't help but wonder if Bletchley Park wouldn't be interested in hearing them. She mentions the park as being a training location, although it is not completely clear at what point in her service she completed that training. And so, with a bit of cheek, I sent off the link to Bletchley itself. I received a bit of a surprise by the reply:

Dear Mr Johnson, (I am clearly going to have to embrace the concept of declaring preferred pronouns.)

Thank you for your email.

I listened to the interview with interest. However, it does not appear that Mrs Van Zant worked at Bletchley Park. It appears she worked in operational intelligence at one of the major Bomber Command bases. I believe her reference to breaking a code must refer to decrypting the operational instructions for the day's raid from Bomber Command headquarters. Enemy messages would of course not contain any information about forthcoming RAF operations. Bletchley Park had no part in briefing aircrew for missions, or conducting interrogations, and no part of the site was underground. In short, the work she describes does not tally with the work we know was done at BP.

Operational intelligence was an important source of information for the RAF about the effectiveness of bombing raids but was a parallel effort to the signals intelligence work done at BP.

It is possible Mrs Van Zant received some training at BP but this would be highly unusual for anyone not involved in signals intelligence work. It is possible she had heard of Bletchley Park and assumed that must have been the country house she was sent to. However, there were hundreds of secret sites in country homes right across the country. At the time you conducted the interview there was very little accurate information available about BP, so it would have been easy for Mrs Van Zant to come to the wrong conclusion.

Nonetheless it is a fascinating, articulate and potentially very useful account of an important part of the air war. You may wish to offer a copy of the recording to the Imperial War Museum for preservation. 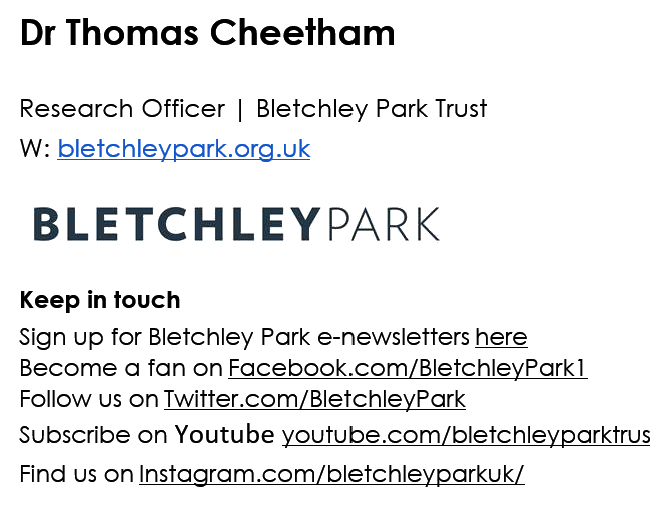